A mother's love is universal 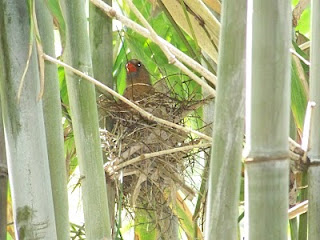 Cardinal nest in Angel Mist bamboo
I love finding bird nests, and this week I found two — a cardinal nest and one built by a pair of wood thrushes.

The thrushes built their nest about 4 feet off the ground in a thick, branchy clump of Sunburst bamboo. The green-striped, yellow-caned bamboo is growing close to a wooden post that the thrushes use as a combination landing strip and lookout post.

Whenever the birds return with food to feed their hungry nestlings (and they do that all day long!), they always stop first at the post, pausing just long enough to look around and assess the safety of the situation before flying into the bamboo thicket and providing their offspring with a tasty meal.

That's how I discovered their nest. I was in the nursery and spotted the wood thrush standing on the post with a beak full of something. Watching from a distance, I saw the bird leave the post and fly into the bamboo. He (or she — both parents help feed their offspring) stayed awhile before flying off again in search of more food.

A little later, I walked over to the clump of Sunburst and discovered three down-covered babies sitting quietly in their tucked-away home. I was careful not to get too close because I didn't want my human presence to limit their chances of survival.

The cardinals also have chosen a clump of bamboo in which to build their nest. Unlike thrushes, which prefer a low-lying location, the bright red male and his less flashy mate have anchored their bowl-shaped structure quite high in the branches of Angel Mist bamboo.

Either I had been particularly unobservant or the cardinals' building skills were especially efficient, but it seemed that the nest appeared out of nowhere. I spend considerable time in the bamboo nursery taking customers on tours, and my route always passes the bamboo where the cardinals built their nest. But until now I had no idea it was there.

Like the wood thrush, the female cardinal builds the nest while her partner stays nearby to watch for danger. Once the nest is completed — and that takes three to nine days — the female will begin to lay eggs and will stay on her clutch of two to five eggs until they hatch a little less than two weeks later. Because of the location — suspended from branches about 12 feet in the air — I was unable to tell how many eggs there are or whether they have hatched. Once a nest is used, neither cardinal nor wood thrush returns to raise another clutch.

Finding bird nests always brings me joy. There's magic in the way a small animal without hands can fashion a beautiful, secure home out of twigs, pine needles, mud and bits of leaves. Using only their beaks to carry building material and their bodies to shape the structure, birds manage to create habitats that are not just functional but architecturally beautiful.

While the Mother's Day tributes of the past weekend are still fresh in our minds, we shouldn't forget that human beings are not the only ones to benefit from maternal love. The baby birds that hatched from eggs laid in a carefully built nest, the tiny bunnies that snuggle in a fur-lined hole, the armadillos born in a burrow are all here because they had mothers who cared enough to find secure places to raise their progeny.

Making sacrifices is what mothers do. It doesn't matter if you're a human being who gives up sleep to tend to the needs of a crying newborn or a mama cardinal that won't leave her nest — not even for food — until all her eggs have hatched. Being a mother means being willing to give of yourself to help your children. How lucky we all are to be the result of a mother's love.
Posted by sherry boas at 5:29 AM