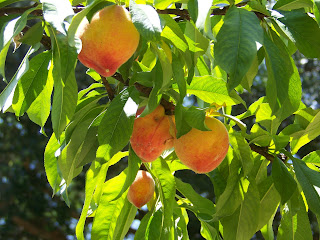 Simply Living
(First appeared in Orlando Sentinel May 24, 2010)
My kitchen pantry looks peachy, and I mean that in the most literal way. I recently rearranged items on the pantry shelves to provide ripening room for our first substantial crop of nectarines and peaches.

This year's abundant harvest is the result of my oldest son's efforts. Three years ago, Timmy planted a small orchard on our property, but he moved out of state before the trees became productive. Although he is not here to sample them, his father and I have been enjoying the fruits of his labor. Thanks to our son, we've been picking fuzzy-skinned peaches and smooth red nectarines by the bucketful — and what a delightful treat they've been.

Last year was the first that the trees produced fruit. Because the initial crop was small, we picked only a few, thinking it would be better to let the rest ripen a bit more before we collected them. That was a mistake. Unbeknown to us, other residents of the property — those of the four-legged, furry-skinned variety — were also keeping an eye on the fruit trees.

The day after our small first harvest, we discovered the entire orchard picked clean. All the peaches and nectarines — ripe or not — had vanished. Whoever the culprits were — raccoons, possums, squirrels or some other hungry critter — they made fast work of our fruit.

Determined not to make the same mistake twice, Ralph and I began gathering this year's crop just before the fruit approached maturity. We walked to the orchard with empty buckets and returned home with containers overflowing. I couldn't believe how much we gathered.

Citrus is the first thing that comes to mind when people think of Central Florida, but stone fruits such as peaches, nectarines and plums are among the many other edibles that flourish in the Florida sun. The University of Georgia, University of Florida and Louisiana State University have all developed varieties specifically for a Southern climate. I don't know which varieties my son planted, but whichever they were, they've managed to thrive despite minimal care.

Before Timmy planted anything, he first dug large holes, removed all the sandy soil and replaced it with a rich mixture of composted manure and peat. That was a smart move because peaches, plums and nectarines prefer a rich, well-drained soil. These relatively small trees — they top out around 15 feet — don't need irrigation or pesticides, but their roots like to spread into nutrient-rich soil.

I'd like to say that Ralph and I did a good job maintaining Timmy's trees, but the reality is we ignored them. It wasn't until they began to bloom — lovely, fragrant pink blossoms emerged toward the end of March — that I paid them any notice.

There are many reasons to plant fruit trees. Homegrown fruit — although it may not be as large or picture- perfect as store-bought fruit — is almost always more flavorful. It is definitely fresher, fun to grow and educational. Perhaps most important, when you grow food yourself, you know exactly what you're eating. That's seldom the case with produce purchased at groceries.

In 2008, the U.S. Department of Agriculture tested imported peaches en route to American stores. The tests showed that more than 50 pesticide compounds appeared on the peaches, including five that exceeded Environmental Protection Agency limits and six banned in the United States.

Analysts at the non-profit Environmental Working Group came to a similar conclusion. They studied 43 fruits and vegetables and found peaches to have the highest amount of pesticide residue. Nectarines ranked fifth. The organization based its rankings on 43,000 tests conducted by the Agriculture Department over a four-year period.

Information of this sort can be so upsetting that it might make you want to stop eating peaches entirely or, at the very least, wash produce thoroughly before it is eaten. Alternatively, you can switch to organic produce or — better yet — set aside a little space in your yard to grow your own.

As parents, we consider it our responsibility to feed our children and provide them with long-lasting sustenance. How lovely it is when a child returns the favor. The orchard our son planted on our property three years ago is a gift we'll enjoy for years. Timmy may have moved away, but with each juicy bite, he's right here in my thoughts.
Posted by sherry boas at 6:17 AM