One of the good guys

I was working on a column when my husband Ralph asked me to come take a picture of a huge snail in the garden. Garden snails are my husband’s nemesis. Some men take aim at deer or wild hogs but my vegetable-growing spouse hunts snails and armyworms. He called me away from my work so I could document this latest find in his ongoing quest to rid the garden of leaf-nibbling critters.

Dutiful wife that I am, I stepped away from the computer, grabbed my camera and went outside to find a shell-bedecked mollusk moving at a snail's pace along the exterior wall of our house. With his vegetable plants nearby, Ralph was eager to have this larger-than-usual snail gone. I snapped off several shots then went back into the house leaving my husband to do what he usually does to an unwanted garden pest - drop it in a bucket of soapy water. 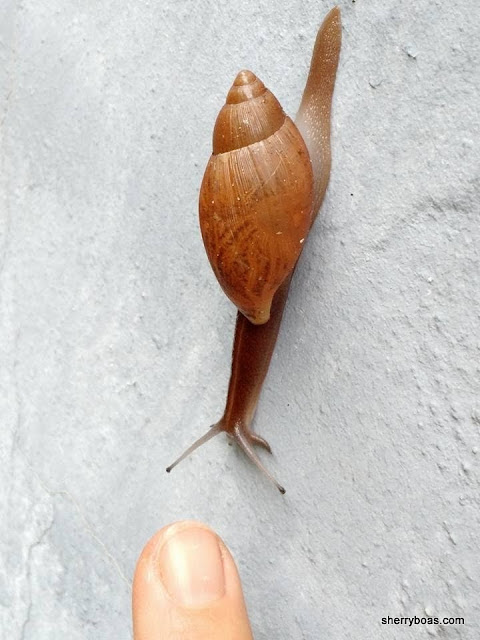 While Ralph was outside enacting his role as Plant Protector, I returned to the keyboard. I was just a few sentences into a new paragraph when he poked his head back inside to ask if I’d found out yet what kind of snail it was. This unexpected new task prompted me to set my present project aside and begin a new search. I typed ‘garden snail florida’ into google images and within moments had confirmed the mollusk's identity.

The critter I had photographed was a rosy wolf snail, Euglandina rosea, a type of land snail found throughout South and Central America and the southern United States. I discovered that rosy wolf snails are predators that - oh no! - dine exclusively on slugs and other snails. That’s right. My snail-hunting husband had inadvertently killed a fellow helper in his battle against leaf-eating garden pests.

The more I read about this snail- and slug-devouring carnivore, the more upset I became. I ran to outside to share my news with Ralph.

“The snail you found was one of the good guys,” I said. “It eats other snails and slugs that eat your plants.”


I quickly filled Ralph in on rosy wolf snail facts as we peered into the five-gallon bucket full of soapy water and dead snails. Our hope was to rescue the pink-shelled gastropod but both of us realized its chance of surviving a sudsy water bath were slim. Unfortunately, we were right.

“I feel terrible,” Ralph said a little later in the day after rain forced him inside. “I wish I’d known what it was beforehand. I wish we had more rosy wolf snails to help control the other snails.”

Motivated by his words, I grabbed an umbrella and went on a search. From the research I’d done while he’d been gardening I learned that rosy wolf snails often come out from beneath shrubs or debris at night and after daytime downpours. These hermaphroditic creatures like to congregate on vertical surfaces to mate. Since both sexes have reproductive organs, their mating involves mutual insemination. My wish was to witness some mollusk lovemaking in the damp drizzle but the only rosy wolf I found was more interested in making its way down the leg of an old metal chair than it was in hooking up for some one-on-one action. 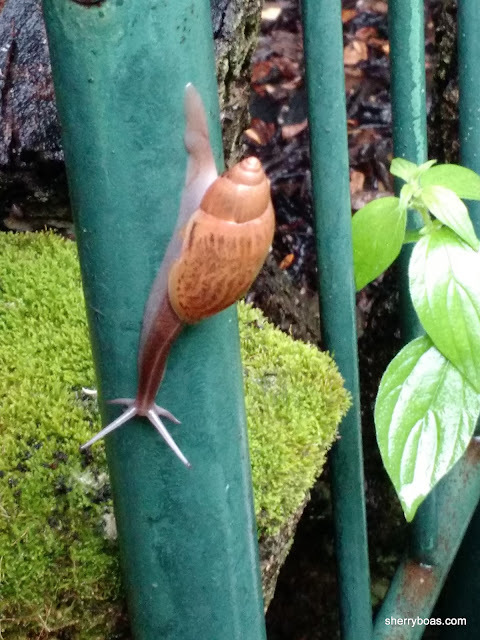 Despite the lack of amorous activity, I thought Ralph would still be interested in observing the rosy wolf snail I’d found. He came to watch it with me and even though this particular mollusk moves three to four times faster than other snails, watching it wasn’t exactly a heart-pounding experience. After awhile we both went back inside leaving the beneficial gastropod to do its job of eliminating bad snails without our overview.

If I’d stuck around longer, I might have seen the rosy wolf snail feed. Prey is found by using chemical sensor cells in its lips to detect a slime trail left behind by other snails and slugs. It then follows that trail until prey is found. Once located, smaller snails are devoured whole - shell and all - while the consumption of larger gastropods involves inserting the rosy wolf snail’s slender body parts deep into its prey’s shell to suck out its meat.

This morning’s request by my husband to photograph something in his garden started out as an interruption to an article i was working on. I had no idea it would take on a life of its own delving me deep into the surprisingly fascinating world of mollusk entomology. Prior to my research, I assumed all snails were garden pests in need of control to prevent damage to edible vegetables but today’s encounter proved differently. It was a reminder that like most things in this world, you can’t judge a book by it’s cover - or in this case, a snail by its shell. Rosy wolf snails are among the good guys and I’m glad to have made their acquaintance.
Posted by sherry boas at 5:36 AM