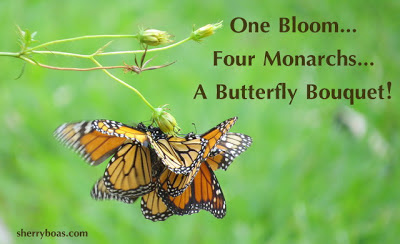 I walked outside today and chanced upon a cluster of Monarch butterflies, their colorful wings all aflutter, attached to one another on an unopened cosmos flower.

As I watched, the entire cluster - still linked together - fell to the ground.

Although the butterflies landed on the hard concrete surface, they seemed less concerned by their location than by the activity in which they were so completely engaged.

Soon after the foursome hit the ground, one Monarch detached and flew away.  Sated, I presumed by the prolonged attachment.

A few minutes later, another butterfly separated itself and took off as well. Only two Monarchs remained.


The remaining duo outlasted me.  I had to leave while they were still connected.  Butterfly sex...who knew the amorous exploits of winged beauties was a group activity!  Spontaneous sex on the wing, on the bloom, on the concrete walkway.

I wonder if they had as much fun as I did?
Posted by sherry boas at 7:16 PM