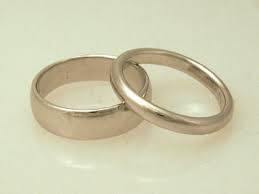 
I was never one of those women who dreamed about getting married.  As a child, I didn’t practice marching down the aisle with Barbie dolls, and during my teens I doubt if I ever picked up, let alone browsed through a copy of Bride magazine.

In December 1972, when Ralph and I decided to get married, it was no surprise that elaborate wedding plans were not on the table.

We were living on Cape Cod at the time and having a justice of the peace formalize our union – at that point, we’d already been living together for two years - seemed good enough for us.  In addition to everything else we had in common, my future husband and I shared a similar distaste for ceremonial displays.  The mere thought of engaging in pomp and circumstance made both of us extremely uncomfortable.

A ring was required for the wedding so we went to a little store in Chatham that sold Native American jewelry and purchased a simple silver band for the modest sum of five dollars.  Ralph chose to go commando – no ring on his finger – and I wished I could have too.  I had said no to a white wedding dress, fancy ceremony, tiered cake and other traditional trappings but a ring was one marital accouterment I felt forced to accept, at least temporarily.  After hearing the words, “I now pronounce you man and wife,” I knew the ring could come off.

Ralph and I have been married 40 years this month (42 years including the years we lived together) and for most of that time, my ring finger has been bare.  My reasons for not wearing a wedding band are in line with the reasons I chose not to partake in the other traditional matrimonial regalia.  I wasn’t comfortable with it and it seemed unnecessary.

Marriage is about commitment and love.  It embodies the willingness of two people to work together for mutual goals and pleasures, to endure difficulties and to support each other when times are tough.  For the past four decades plus two, my husband and I have done just that.  No band of gold or silver could have bound us together more tightly than have the trials and tribulations of daily life.

We’ve raised four children during our marriage.  The two of the four who are married have forged their own path down the matrimonial aisle.  Both opted to have informal outdoor wedding parties at their parents’ homes attended by intimate gatherings of friends and family.  A friend performed the ceremony for one of our daughters and our son-in-law’s father presented nuptials for the other.  Although neither daughter wore a traditional gown, both embraced the idea of wedding cakes.  And as far as rings go, on their hands, each daughter proudly wears a wedding band as well as a modest but lovely engagement stone.

I’ve never regretted our long-ago decision to forgo a traditional wedding.  As Ralph and I celebrate yet another anniversary, I don’t need a ring to remind me how much love and attachment I feel for the one special person with whom I’ve chosen to spend my life.  A silver or gold band might represents heartfelt commitment to others but the only thing my hand needs to remind me of our devotion to one another is my husband’s fingers interlaced with mine.
Posted by sherry boas at 5:29 AM