Plant a flower...get a butterfly 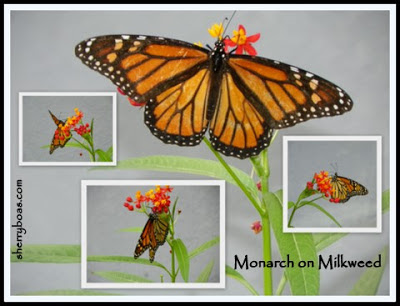 
The lifecycle of the lowly milkweed plant is a wondrous thing.
Asclepias curassavica, commonly known as scarlet milkweed, tropical milkweed, blood flower and Mexican milkweed, starts life attached to a bit of fluff floating through air on a parachute of feathery whiteness.  Winged seeds that land in suitable spots (which, in the case of this naturalized weed, are just about anywhere) waste no time developing.

Roots go down.  Sprouts grow up.

Before long, elliptical leaves emerge followed by 2 to 3-inch wide clusters of reddish-orange-yellow star-shaped flowers.  When the flowers finish blooming, they transform into soft-sided, green seedpods that harden and turn grey-black as they mature.  Each pod contains hundreds of small round dark seeds attached to lightweight fluff.  Eventually, the pods crack open allowing the seeds to drift off to repeat the cycle of self-propagation.

While scarlet milkweed progresses through its multi-staged development, an entirely different lifecycle is also underway.

Monarch and queen butterflies use scarlet milkweed as a host plant.  Intrinsically interlinked with the nectar-producing wildflower, the butterflies deposit eggs on the plant’s leaves and stalks.  Less than a week later, the eggs hatch and miniscule emerging caterpillars immediately begin chomping away on the plant’s greenery.  After 9 to 14 days of voracious eating, the caterpillars have grown huge on their leafy diet and the once-pretty plants are devoid of verdant accoutrements.

Caterpillars raised on milkweed leave the plants when ready to pupate.  They crawl a few feet away in search of a secure spot to form a jewel-like green chrysalis.  It takes another 9 to 14 days to complete the metamorphosis.  When the lovely butterfly emerges, it quickly flutters off toward the milkweed plant to begin the cycle again.

A few weeks ago, I looked out at the three milkweed plants in my front garden wondering what I should do with them.  The flowers had stopped blooming, the finger-length leaves were gone and the butterfly metamorphosis had progressed into the chrysalis stage.  All that remained of the previously cheery plants were a few 3- to 4-foot tall spindly stalks.

In a surge of tidiness, I considered clipping them off but I got distracted and went off to do other things.  It’s a good thing I did because a few days later new leaves began emerging from the previously bare stalks.

Today, about a month after noticing how bare the milkweeds had become, the plants boast a flush of greenery.  Once again, clusters of bright reddish-orange-yellow blooms are attracting a parade of nectar-seeking fliers.

Scarlet milkweed is a fast-growing evergreen perennial native to South America, naturalized across the southern United States but also grown in northern locales as an annual from seed.  This no-fuss plant isn’t particular about soil or water conditions growing equally as well in dry, sunny spots as it does in more sheltered moist locations.  It also doesn’t mind growing in confined spaces, which makes scarlet milkweed a fine addition to a patio or container garden.

At my house, burgeoning sprouts often pop up in the cracks between paving stones and among other potted plants.  I usually pull out the ones rooting through the cracks but leave alone those that have settled in previously planted containers.  Since scarlet milkweed is tall and slender, it coexists nicely with other tall blooms.  When it self-seeds among shorter plants, I’ve found that topping the leggy stalks encourages broad instead of vertically growth.

I like having plants in my garden that do so much while demanding so little.

Scarlet milkweed provides pretty flowers from spring through late autumn, attracts bees, hummingbirds and an abundance of beautiful butterflies to the garden.  Its seedpods make attractive additions to dried flower arrangements and children enjoy playing with the fluff inside the pods.  Butterflies put on their own show as they use the plant to transform from egg-laying flutterers to leaf-gobbling caterpillars to emerging beauties.

In return for all it gives, this lowly wildflower asks nothing from the gardener but a bit of space to grow and the chance to recover when its beauty seems all but lost - two requests I am more than willing to fulfill.
Posted by sherry boas at 6:54 AM