Better known as pinecone ginger or shampoo ginger, this perennial beauty sports cone-shaped structures called bracts that change from a light green to a bright, commanding red in late summer and early autumn. By late September, the cones are almost all red — a shape and color that stand out against the ginger's long, green, bladelike foliage.

When I'm walking with customers through our bamboo nursery, where patches of ginger flourish in the shade beneath tall bamboos, people often ask, "What's that plant?"

"It's a type of ginger," I explain as I squat next to a stand of the yard-tall beauties. "If you squeeze the soft, red cones, a clear, fragrant liquid oozes out."

At that point, I usually put my hand around one of the pine-cone-shaped bracts, which causes the liquid to escape.

"Want to try it?" I ask. "It's not sticky, and it has a mild spicy fragrance that smells lovely."

People seldom take me up on the offer. Perhaps they're afraid the liquid will stain (it won't) or sting (it doesn't). For whatever reason, their reticence prevents them from sampling one of nature's finest body-care products. For centuries, indigenous people in Asia and Hawaii have used the liquid from Zingiber zerumbet as a shampoo, hair conditioner and body wash. Contemporary manufacturers even incorporate it into commercial shampoos.

I've never washed my hair with pinecone ginger, but I have often applied the clear, slightly sudsy fluid directly to my skin. When I'm hot and sweaty, I find it refreshing to rub a handful of the ginger-scented liquid on my body. Although the fluid is absorbed almost instantly, the fragrance lingers to provide a gentle pick-me-up.

Zingiber zerumbet is a perennial plant that develops from underground rhizomes. The tan, papery tubers form "eyes" from which shoots appear in the spring. Throughout the warm months, those shoots develop into tall stalks that support long leaves fanning out on opposite sides of the stem. 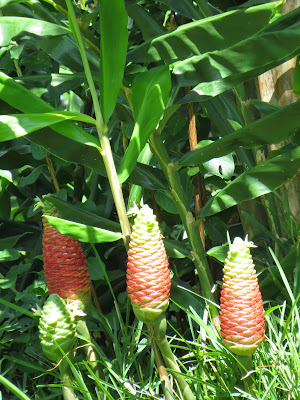 The pine-cone-shaped bracts appear later on separate, slightly shorter stalks. As the season progresses, one to three flowers — small, yellow-white blooms — poke out of the bracts. If you place your nose close to the flowers, you'll notice a spicy aroma. There's something exotic and enticing about the smell. The scent alone is invigorating. 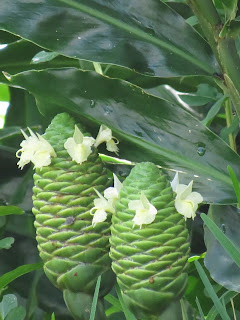 Pinecone ginger doesn't last through the winter. Every year when temperatures dip, the leaves turn brown, shrivel up and die. That's the time to snip off the dead foliage, add a blanket of mulch or soil supplements and leave the plant alone. Unless you want more gingers. In that case, winter is a good time to dig up some of the underground rhizomes to replant elsewhere.

Pinecone ginger grows well in full to partial shade. It tolerates drought but also does well in moist locations. I've found that rhizomes growing in unimproved soil without irrigation are decidedly smaller and slower to bloom than those planted in rich, irrigated soil. When winter is over, the underground rhizomes respond quickly. Ginger shoots poke through the ground and rapidly grow to their full height of about 3 feet soon after temperatures warm.

I'm fond of easy-to-grow plants with multiple functions, and Zingiber zerumbet is certainly that. It not only looks pretty, smells lovely and has an eye-catching bract, it also produces a fragrant liquid that can be used directly from the plant as a body-care product. Whether known as pinecone ginger, shampoo ginger or by its Hawaiian name, awapuhi, there's no denying that Zingiber zerumbet is a botanical zinger.
Posted by sherry boas at 7:21 AM