Bow ties: Want to tie one on? Then practice, practice 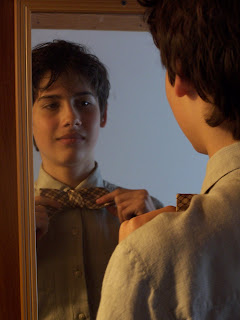 SIMPLY LIVING
Sherry Boas
(First appeared in Orlando Sentinel April 1, 2007)
Do you know how to tie a bow tie? I don’t. Neither does my husband. But my 15-year-old son wants to learn.

His grandfather, who died the year after Toby was born, was famous for his bow tie collection. As the longtime chairman of the math department at Northwestern University, Professor Boas was widely respected for his many successes in the field of theoretic mathematics. But it was his eclectic and colorful necktie apparel that caught the eye of new students. Rumor had it that the good professor seldom wore the same neck adornment twice.

Thanks to his wife, a fellow professor who also happens to be a whiz with a sewing machine, that rumor may have been true. I know that each time Mary Boas sewed a new outfit for herself, she used scraps of the same fabric to make a matching bow tie for her husband.

For his recent 15th birthday, Toby inherited two of those ties. Ever since, he’s been trying to learn how to tie them.

These days, the Internet is the place to go when you have a question. The first time Toby asked if we knew how to tie a bow tie my husband and I answered in unison, “Google it.”

But googling didn’t help. Yes, there were several sites offering online instruction. There were even online video demonstrations. But Toby found all of the sites severely lacking in useful direction.

“There are no close ups,” he complained. “And they don’t show you the last step, pulling the tie through the loop.”

In the weeks since Toby’s interest in neckwear piqued, I’ve been on the lookout for local men wearing bow ties. I haven’t found any.

Are bow ties obsolete? Have they gone the way of wind-up watches, cufflinks and aprons?

The world today is faster paced than it was 50 years ago. We’ve come to expect - even demand - immediate gratification. When a webpage takes more than three seconds to load, we’re annoyed. If the TV remote doesn’t work, we grumble and press the button repeatedly rather than get up to switch channels. We dine on prepackaged foods, frequent drive-thru restaurants and opt for digital over manual whenever it’s available.

Even our language has been abbreviated to make quick work of conversation. Acronyms like LOL, BRB and ASAP have become part of the collective lexicon. It’s not surprising that a simple act like tying a bow tie has gone the way of lace up shoes, handwritten letters and rotary phones.

All take too much time and are no longer necessary.

Teenagers wishing to emulate a grandparent by mirroring their fashion style have it tough. High school curriculum doesn’t offer a Men’s Fashions of Early 20th Century or a Bow Tie Tying 101 class.

In between homework, after school and volunteer activities and helping out around the house, Toby finds time to stand in front of a mirror and practice. And, as the old adage says - practice does make perfect.

Toby’s latest attempt elicited rave reviews from his father and I.

“I think you’ve got it!” we cried, as he stood before us looking rather dashing in black pants, a dress shirt and suit jacket.

His bow tie was sharply snapped and evenly tied.

Toby’s grandfather would have been very proud.
Posted by sherry boas at 1:02 PM